Home What's New AnswerThePublic Get’s Acquired by Neil Patel: Users Want to Know Why and Lament Whether This is a Good Move

Users took to Twitter recently to lament the sale of AnswerThePublic by Ubersuggest and its well-known SEO expert, Neil Patel. AnswerThePublic had been in decline in recent years, with many of its former users stating that it had been months to years since they last implemented this tool in their own SEO efforts. Now, it seems that most users will not be returning to the platform. 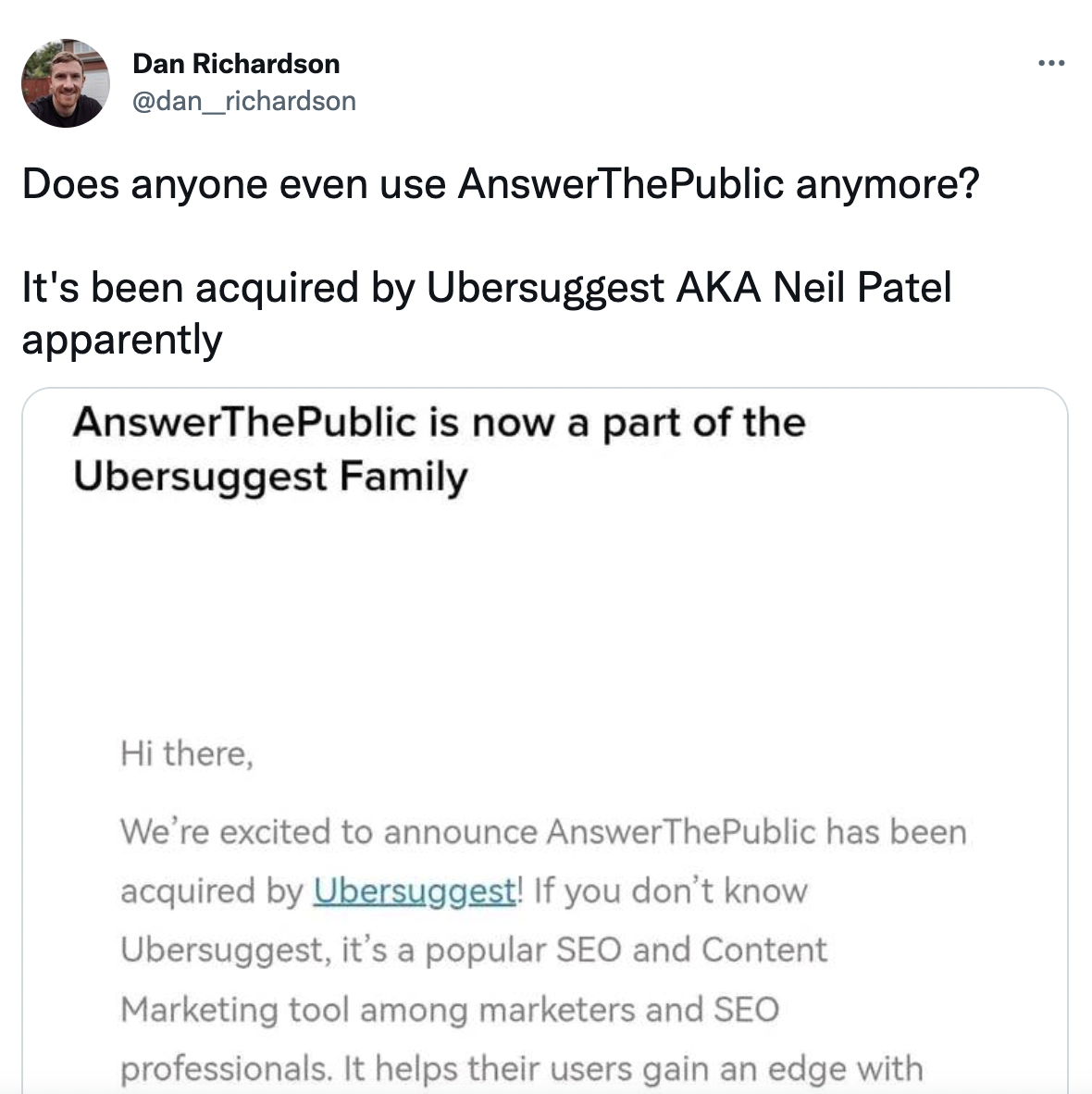 If AnswerThePublic has been on such a downward trend, why would Ubersuggest spend money to acquire it?

Users speculated that it might have been a cheap and easy acquisition for Ubersuggest since very few people were still using the tool. AnswerThePublic switched to a subscription-based service for its users, and it is possible that Patel intends to use the tool to gain a few new loyal subscribers of his own.

It seems that NP Digital and his Ubersuggest tool are in the habit of acquiring SEO tools that are in decline to add to their own empire.

For now, it seems that there aren’t many new changes being made to the ATP tool. Users can still access its current features uninterrupted. However, there have been a few minor changes to denote the introduction of Ubersuggest to its users. Namely, they have added the Ubersuggest name on the homepage and included a picture of Neil Patel’s face.

According to NP Digital, there may soon be more free features on the platform. This should make up for the lack of updates from the former owners.

Ubersuggest users may have gotten the better end of the deal. The features of AnswerThePublic will now be available on its platform. In particular, the key difference will be the core feature that draw users to ATP – keyword visualization. While this feature may not be up and running on the platform just yet, Patel’s team promises that it is coming.

The benefit of acquiring AnswerThePublic should not be understated. Because the two platforms are now combined, Ubersuggest covers 30 billion keywords and 50 trillion backlinks. This makes it one of the most robust SEO tools in the industry when it comes to optimizing the data that is available on search queries for Google.

As a result of the two platforms merging, Ubersuggest users will have a handy new tool that will appeal to a broader base of marketers.

What SEO Tools Will You Use?

With the introduction of ATP to the Ubersuggest family, digital marketers have a leg up on their competition. This is true even with the free versions of both tools. For more advanced features, users can pay for a subscription to the freemium tools.

With the benefits of both tools rolled into one package, users will have a field day finding new keywords for their SEO articles, landing pages, and more.