Home What's New Do YouTubers Get Paid if I Skip Ads?

Honestly, when was the last time you ever watched those little bumper ads at the beginning of a YouTube video?

If you’re like most people, the answer is, “not recently.” According to at least one study, almost 90% of viewers skip those ads as soon as possible.

And if those ads are unavoidable, they’ll do everything they can to find an alternate source of content. Content creators, on the other hand, love them. In-stream advertising is where they derive the bulk of their revenue. If you skip them, your favorite YouTube star may suffer in the process.

But do YouTubers get paid if you skip ads? Part of the answer to this question is based on anecdotal evidence, but there are some hard facts that can help us figure out if our “impatience” is costing people their livelihood.

Do YouTubers Get Paid If You Skip Ads?

Technically, if an ad is skipped, the advertiser isn’t charged a dime. This also means that the content creator doesn’t receive a commission either.

So, it’s virtually impossible to miss out on at least a portion of that ad money. Even if they skip ahead, there’s always the chance that they click on the ad.

YouTubers are paid if one of three things happens:

Since the rate of people that regularly skip ads is so high, you’ll need to increase your volume of views for you to start making significant money.

What Types of Ads are Available?

Whenever a video creator sets up a YouTube channel, they set the parameters for what types of ads appear on their videos.

Each one has its own pros and cons, but the success ultimately depends on your audience size and the loyalty of your viewers. If you have a huge, dedicated fanbase, you can pick anything you want and you’ll still make money.

Monetize too soon and you may compromise the integrity of your channel. 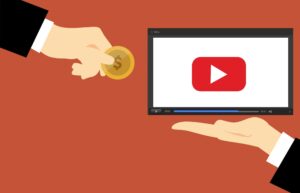 Below are a few of the options YouTube presents to its creators.

By far, the most common type of ad is the skippable ad that appears at the beginning of the video.

Once the first five seconds are over, you’re free to skip ahead to the video. Though you won’t get paid if the user skips the ad, the amount you’ll receive if someone clicks on the ad is usually more than other types of ads.

These ads may be “unskippable,” but they’re also relatively short. While some video ads on YouTube can cross the 30-minute mark, non-skippable ads have a cap of around 20 seconds.

If you combine the above two types of ads, you get bumper ads. These ads appear at the beginning of videos, are unskippable, but max out at six seconds. Frustrating, but doable.

Only available on the desktop version of YouTube, overlay ads show a banner ad at the bottom of the screen that takes up 20% of the screen.

YouTube does offer other types of ads on its platform, such as ad pods and back-to-back ads, but those are only used for longer or consecutive videos.

If you are determined to not have any ads appear on your video, you’re better off using shorter videos.

Keep in mind, though, that this will substantially affect your revenue.

How Do YouTubers Make Money On Ads?

While ad revenue is a significant portion of any YouTuber’s income stream, it’s less clear exactly how to make money vlogging or how YouTubers get paid.

Do content creators receive a commission every time an ad is viewed, for instance, or do the viewers have to actually click on these ads first?

Before any YouTuber can hope to get paid, they need to apply to the YouTube Partner Program. The criteria for being accepted into this program include having over 1,000 subscribers and more than 4,000 hours of content watched over the previous 12 months.

Once you meet both of those criteria — and have a linked Google AdSense account — you can turn on monetization for your YouTube channel. 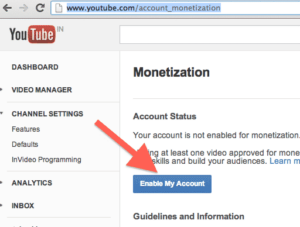 But one thing that most people forget is that you don’t get paid for how many YouTube views your video receives — you get paid for the number of ad views.

As stated above, most of these ads are unskippable, so the two usually go hand in hand.

You can also get paid when a user clicks on the ad itself and heads to the sponsor’s site.

How much can this be for the average YouTuber? It fluctuates from channel to channel, but the average amount a YouTuber can expect to receive from their videos is $18 per 1000 ad views. That comes out to about $3-5 per 1000 video views, on average.

That discrepancy accounts for the fact that not every person who watches the video also watches the ads that accompany it.

What Happens When You Skip the Ad?

Besides the simple fact that your favorite YouTuber will miss out on some precious ad revenue (don’t worry, everyone does it), skipping ads can create a significant ripple effect. Not only will your channel be affected, but the advertiser and complementary channels can be affected as well.

Google’s algorithm is constantly checking its assets for relevancy, and that includes monitoring YouTubers’ channels to see what content is resonating with what audience.

If a YouTube channel has a notoriously high amount of skips, it may choose to show different ads to that particular audience.

Another side effect comes from the advertiser themselves. If a YouTube ad is shown to a few different types of audiences, and it continues to be skipped, they will begin to show the ad less and less. Their advertising rates will go up, and projected reach may go down, thus minimizing the overall impact.

But not every advertiser is quick to panic. Since YouTube doesn’t charge the advertiser if a person skips the ad, there’s a chance that a brand may be able to show their ads to a large audience (albeit, those who skip them), and not get charged much.

There’s still little to no engagement from the customers, but at least the message is getting out.

Everyone wins when the advertiser and the channel match up in terms of audience, which is ultimately YouTube’s goal. When that happens, both parties benefit.

Somewhere along the way, YouTube has picked up on the fact that their viewers absolutely hate watching advertisements (crazy, I know).

Instead of jamming home more ads and telling their audience to deal with it, YouTube developed a subscription model called YouTube Premium. 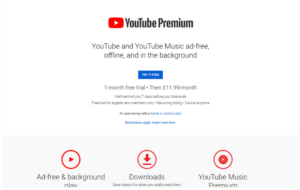 For $10 a month, YouTube Premium subscribers can skip every type of ad on any video they watch platform-wide. $10 is not an insignificant amount of money, but for those who despise ads enough, it’s well worth the cost.

But with ads no longer appearing on YouTubers’ videos, does that mean their revenue source is gone?

Not exactly. According to YouTube, Premium’s royalties are split among the YouTube videos that those subscribers watched that month. It’s split along watch time, so if your content accounted for 5% of a subscriber’s total view history that month, you would receive $0.50 in royalties.

Originally launched in 2015 under the name YouTube Red and rebranded in 2018, YouTube Premium has enjoyed a surge in popularity in the last few years.

In 2020, for example, its subscriber count went from 18 million to nearly 30 million. While not a main source of revenue for many YouTubers, YouTube Premium can still provide a healthy side hustle income for most content creators.

Fortunately, there are a bunch of other ways to make money on Youtube, so YouTube Premium will be another tool in your monetization arsenal.

Learn more about this in our post about how long does it take to make money on YouTube.

Do YouTubers get paid if you skip ads? For some of the more popular channels, skipping ads probably won’t have much of an impact. They have enough sponsorships, affiliate links, and ad revenue from everyone else that they most likely won’t notice.

But for smaller channels that are just getting started, it can make a big difference. If your favorite channel doesn’t have other ways for you to support their content, consider sitting through that ad the next time it shows up on your screen. It means more than you think.

25 Best WordPress Alternatives + Which One to Use For Your Website