Apart from claiming to have tied up with major e-commerce brands, the website of the company also used the logo of CJ Affiliate sourced from the web, to gain legitimacy among Indian investors.

In May 2021, Irshad from Ernakulam in Kerala invested Rs 5,000, in what he thought was an investment scheme that was introduced to him by a friend. The scheme promised investors returns worth 5% to 25% for their investments and even rolled out an app. Irshad trusted the website after seeing the CJ Affiliate logo on it, and assumed it was an affiliate marketing company as well. Affiliate marketing is a system where a person is paid a commission by a retailer when traffic is directed to it or sales are made through the person’s referral. US-based CJ Affiliate is a well known online advertising company.

However, on August 24, the website vanished, and the customer support turned unresponsive. A puzzled Irshad reached out over the affiliate marketing WhatsApp group but didn’t find any answers. “I invested because they had the logo of a well-known affiliate marketing company on their website,” says the 23-year-old, who added that he will not be filing a police complaint.

Irshad earns Rs 5,000 per month working nine-hour days as an assistant for a Chartered Accountant. “I dont have the time or the money to go behind a police case,” he says. He says he was tricked by the website’s customer care support into believing that the platform even had tie-ups with Amazon India.

Apart from claiming to have tied up with major e-commerce brands, the website also used the logo of CJ Affiliate to gain legitimacy among Indian investors. In fact, to celebrate 1 lakh registrations on their website, the website even held a celebratory three-day event on August 22 where users could “recharge” (invest) sums ranging from Rs 500 to Rs 10,000 and earn Rs 50 as a reward. As of September, the website is defunct and the customer support has been unresponsive.

Akanksha Sinha, a 21-year-old from Mumbai, who lost Rs 50,000 via the same investment scam, has approached the Mumbai cyber crime police with a complaint. The aspiring model, who is a social media influencer, first came across the investment scheme in January through a family friend who was promoting it. The family friend, however, warned her not to invest huge sums of money. “The promoters would hold meetings on Zoom urging people to invest but advised people against investing large sums of money,” says Akanksha who is asking other investors who were conned to file a complaint. “But many people aren’t ready to as their losses are small,” she adds. 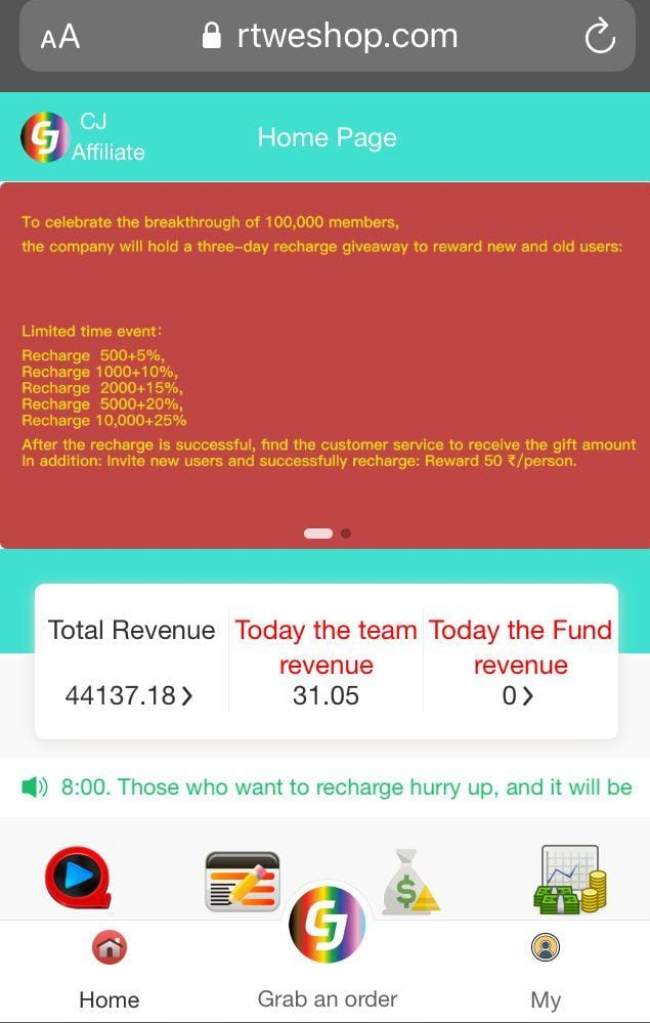 Prospective investors were also allegedly approached via WhatsApp using dummy phone numbers. “These fraudsters are trying to stay under the police radar by collecting money in small amounts but in large volumes. It’s also a common practice among the scammers to use well known brand names to gain legitimacy,” says Sandeep Sahoo, Director of Save Them Foundation, a team of cybersecurity researchers and criminologists investigating several scams in India.

“The numbers they use will mostly be of people whose devices have been hijacked but are yet to register with WhatsApp,” he adds.

SaveThem India Foundation looked into the transactions that the victims made via UPI payments and found that funds were being received by several companies based out of Bengaluru.“The transaction, which the victims made via online payment were received by multiple private limited companies situated in Bangalore and the directors of these companies didn’t file Form DIR-3 the KYC for obtaining Director Identification Number (DIN) numbers for the company director. Most of these companies were incorporated and had been operating for less than five months,” he found.

Sandeep says new investors should research the companies they plan to invest in and check reviews of the app on the Google Play Store. “People should read the terms and conditions, privacy policy and should also go through the reviews before investing into unknown platforms.If they claim to have tie ups with major e-commerce websites or affiliate marketing companies, check the official websites of these companies to see if they have announced such a tie up,”  the techie adds, while suggesting ways to spot a scam.